The city of New Orleans required motorists to license their autos first in 1910, with tags provided by the owners. Curiously, New Orleans plates featured a single letter followed by two single digits. The significance of the letter is not known, but perhaps it was intended to limit competition for low numbers. (New Orleans issued official porcelain plates for 1912, ’13 and ’14, before the state took over registration in 1915). 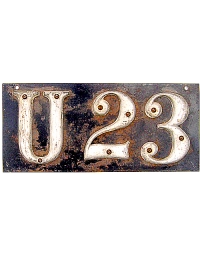